Two years ago today, Sept 30th 2010, we brought home Joanna from the hospital after 5 months in intensive care.  God had given us fresh eyes to see His gifts, His miracles, His perspective.  I was aware each day that I was holding a miracle, feeding a miracle, singing soft lullabies to a miracle that apart from the saving work of God, would not exist.

“Take care lest you forget the Lord your God by not keeping his commandments and his rules and his statutes, which I command you today, lest, when you have eaten and are full and have built good houses and live in them, and when your herds and flocks multiply and your silver and gold is multiplied and all that you have is multiplied, then your heart be lifted up, and you forget the Lord your God, who brought you out of the land of Egypt..."

Do you know how many times the words "forget" and "remember" appear in the Old Testament?  If forgetfulness were an Olympic sport, I'd be the gold-medalist.  I'm amazed at my own propensity to forget the wonders and works of God, just like the Israelites quickly forgot the God who saved them.

So these next several posts are dedicated to my little girl, who helps me each day to apply Dueteronomy 8 and REMEMBER what God has done.  She is living proof of God's kindness and power, and through her, God whispers - Do not forget...

This is Joanna's story:

Late April - flowers blooming, temperatures rising, little fists and feet kicking inside my growing belly. My heart was filled with a newness and beauty that matched the changing season.  I headed off on a weekend Women's Retreat with my church - the topic?  1 Peter and the Reality of Suffering.

I cried over coffee with a friend only a few days later.  What could God be preparing me for?  My fearful self reasoned that He would only teach me about suffering if He was going to introduce it, and soon.  Only later did I realize that He was feeding me with morsels of grace, long before I needed them.

April 29th, I woke up with a bit of blood, unconcerned, since it had happened earlier in the pregnancy. Off I headed to Target with a dear friend to complete a baby registry.  Heading to campus later that evening, at the encouragement of Dave, I called my doctor to tell her about the spotting.  She told me that I needed to come into the hospital, just to make sure everything was fine.  I agreed that I would, assuring my husband that I would see him at home as soon as they cleared me.  Dave was teaching that night on Romans 8.

Several hours later, I learned that I would not, in fact, be returning home. The IV rhythmically dripped medication into my exhausted body as I was placed in the ambulance and transported to a larger hospital.  My body was going into labor; I couldn't feel it, and I could do anything to stop it.

"23 week babies don't normally make it," we were told.  "And if they do....well, life doesn't often look too great for them."  After poking and prodding and needles and fasting, I was told that I would have emergency surgery to stop our daughter from being born.  I woke up from anesthesia, and never has a single word held so much discouraging weight - unsuccessful.

"Just hold her in as long as possible," I was told.  "Every day will help."  And so I did.  How does lying still so long produce anything of value?

We would pray for wisdom each day - what to do if today is the day she comes?

I cried to my mother that I wasn't cut out to take care of a special-needs child.

I cried to my husband that I'm sorry because my body can't seem to hold in a baby.

I cried mostly knowing that I needed to let her go before I even got to hold her.  Because every parent needs to let go of their child - some when they go off to college at 18, others before they see the first ultrasound.  Every parent must say at some point - This is God's child...a gift He entrusted to me for a short while.

We cried together.  Others cried with us.  For us.  Perhaps though, the most precious tears shed were those of our Heavenly Father, who weeps with us in our sadness and comforts us as deep seeded dreams slip away.  He knew the pain of losing a child.


"If she comes naturally," we were told, "She'll have bleeding in the brain.  Don't birth her naturally."
"And if she's breeched, the extra pressure on her head will almost certainly cause more damage."

We were crippled by fear of the "what-if."  Never had decisions such as these rested in our hands.   Our first opportunity to be the advocate for our daughter -- but what to decide?


10 painstakingly slow days.  We would watch the clock knowing that time was our hero, but even time couldn't save our child -- only the Lord could.  We waited.  And we tried to imagine how life would change.  Would we leave the hospital soon with only the memory of a child?  And then early one morning, her heart rate dropped and my body responded with contractions, and the planned emergency C-section just wasn't fast enough -- our daughter was born before the doctor had time to suit up.

Joanna Grace -"God's gracious gift" - entered the world on Mother's Day, May 9th, unable to breathe or scream.  I didn't hold her, I didn't see her, as they whisked her off to the NICU to begin resuscitation.  She was the size of a Coke can, weighing 1 lb, 2 ounces.  The nurses hesitantly told us that she was a determined fighter, but I disagree.  A 1-pound baby can't do too much fighting.  God was determined to fight for her. 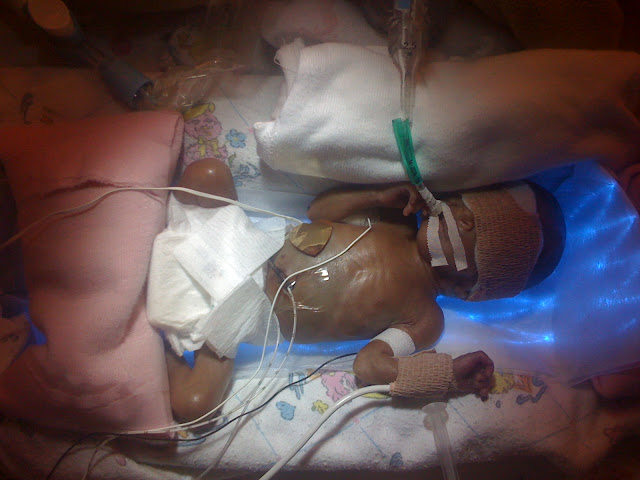 Remember the works of the LORD.

Remember the words of the LORD:  "The Lord will fight for you, you need only to be still."  Exodus 14:14