I stood over her incubator when she was 2 hours old, watching a machine pump air into her tiny chest.  Her nearly translucent skin was already marred by IV's and needle sticks.

If she was in pain, I wouldn't have known.  Her vocal cords weren't strong enough to make a sound.

I heard "congratulations" a hundred times -- was I supposed to be celebrating?  I felt a strange mix of sadness and joy, and what emotion was appropriate?  The parenting books never prepared me for this one.


And I don't feel it, but I know I need it, and so I remind myself of Truth and sing with my lips because choosing to rejoice and choosing to believe is the way God feeds me grace.  And so this song would resonate in my heart and in my hospital room.


"Allow yourself to get close to her," my mother encouraged me.  "Don't distance yourself out of fear."  Wise words from a woman who knew the pain of parenting - both loving and letting go.

I would stand there and watch, feeling guilty that my heart was not burning with affection towards this tiny person.  God, create in my heart a fierce love for this child.

Within minutes of my standing there, her arms and legs started flailing rhythmically.  It didn't stop.  I looked around for explanation at the doctors rushing towards us.  "She's having another seizure," I was told as nurses frantically pumped medication into her IV port.  "You may want to step outside." 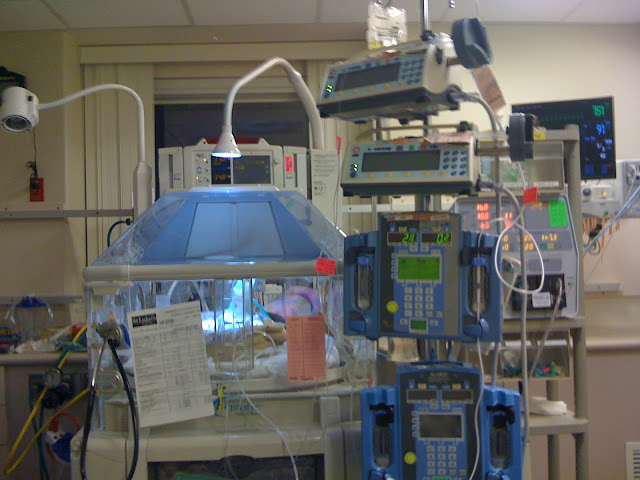 "It doesn't look good for her," the main neonatologist told Dave and I a few hours later.  "She has citrobacter in her blood.  A seizure would indicate that it's gone to her brain.  We're doing the spinal tap now.  If it comes back positive, I'd encourage you to think long and hard about whether you want to keep her on these machines.   Citrobacter in the brain will likely render her paralyzed and retarded..."

We left that conversation silent and stunned.  Returning to our hospital room, we dropped to our knees.  Please, God, fight for her.  And we would speak this truth to our grieving hearts -

A soft knock at the door an hour later.  A different neonatologist. "I'm not sure how it happened, but the citrobacter is gone from her bloodstream."
A gentle whisper from above - I will fight for her, you need only to be still.

Prayers answered, and more reasons to pray would arise.  Hours seemed to crawl.  What do you do with time when life hangs in the balance, other than pray that the days would pass quickly?

2 am.  I would bring milk into the ever bustling NICU.   Joanna wasn't being fed anything, but it was my sole contribution as her mother.  And so every 3 hours, I'd bring in more, stockpiling for the day that she needed it. 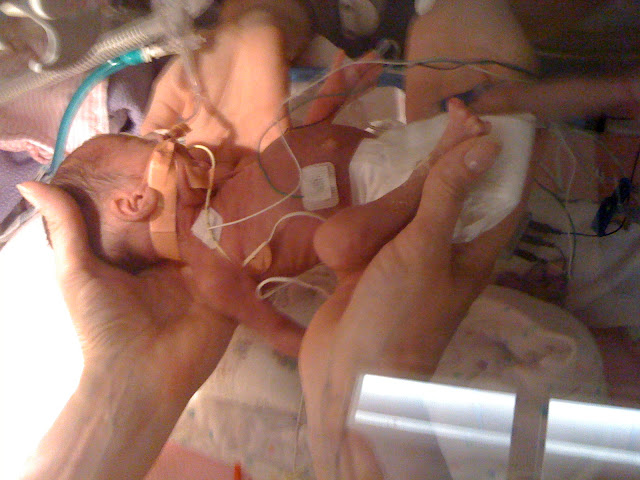 Days passed.  She grew stronger.  "If she can make it through the first week, she has a good shot of survival," we were told.

She made it through the first week.

For weeks, the pattern would hold: two steps forward, one step back.  We would visit every day.  We would look at her.  We would talk to her.  We'd pray for her.  We'd poke our fingers through the incubator holes and touch her precious fingers.  We'd stare at her monitors.  Our hearts would rise and fall in tandem with her O2 stats.  Every once in awhile, they'd drop low enough and an alarm would sound, and nurses would come rushing in to raise her oxygen levels.  Our hearts would sink. 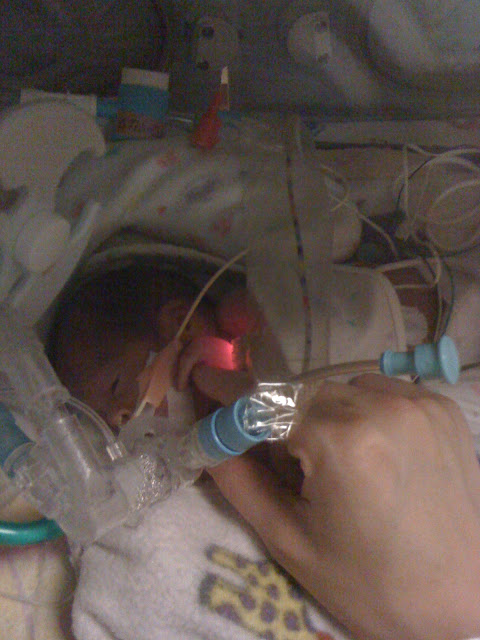 There were challenging days, where I'd choke back tears and fight the lump in my throat and pretend to be brave.

"There's a hole in her heart that's not closing," we were told.  "Her underdeveloped eyes will likely need surgery."  "She has another infection; another round of meds."  "She's had another seizure."

But there were joyful days too.

"She tolerated .5mL of breastmilk."  "Her lungs look normal."  "Another head ultrasound....there's no bleeding in her brain."


But all days were ordained.

I held her for the first time when she was 1 month old.  My heart was pounding and I was sobbing with joy, and her temperature was dropping and she struggled being out of her incubator, but those precious 30 minutes were the Lord's way of whispering - this is how I feel when I hold you, my daughter.


And then, the call came at the end of June - her body stopped tolerating the milk - she would be airlifted immediately to a larger hospital.  How could God be working through a giant leap backwards?  Her oral feedings would stop and antibiotics begun.  She would undergo two surgeries - one on her heart, another on her eyes.  There would be no more holding her.

And I knew what was true but I'd struggle to believe and needed the grace of God even to be able to utter words of hope.  But God's faithfulness outshines ours, and God delights in showing His power through weak, 2-pound vessels, and God is the faithfully advocating parent when I can do nothing except sit and cry.  And He would whisper to me - 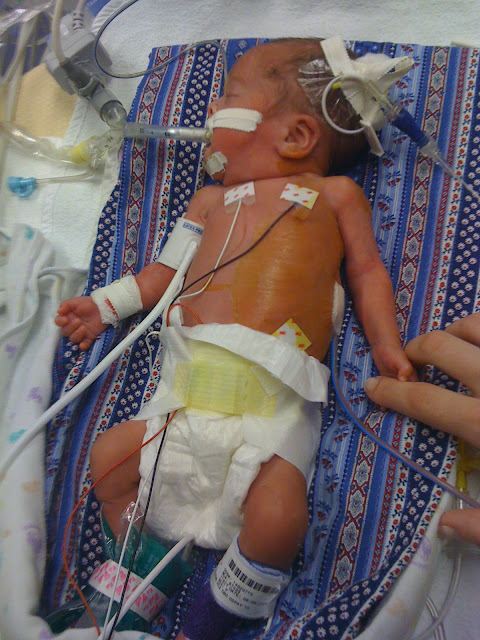 And He fought for her.


Over the next several months, He would continue. 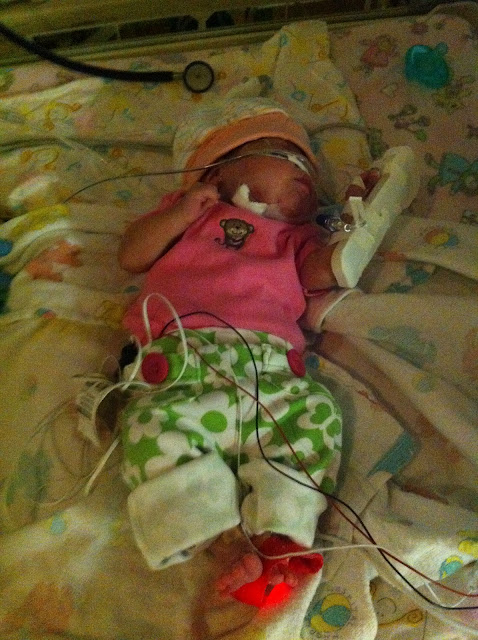 She gained weight.  She got off the ventilator.  We would get to hold her. Every day. 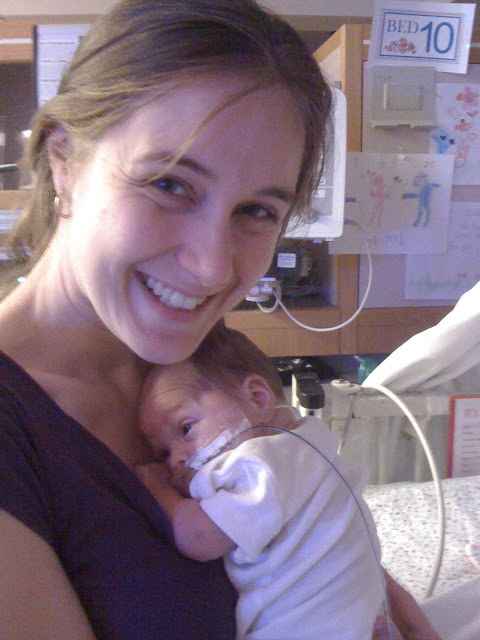 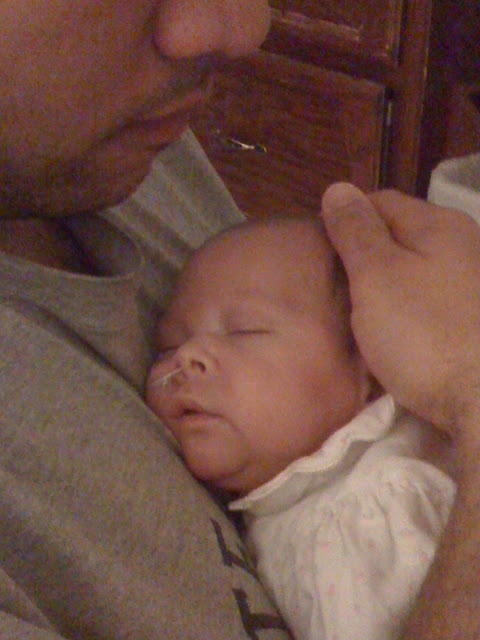 And then one day, doctors started talking to us about going home.

The battle wouldn't end.  Medical problems are not confined to the four walls of the ICU. We'd take them home with us.  But our God, her advocate, had proven His faithfulness.   He was simply moving the battlefield.